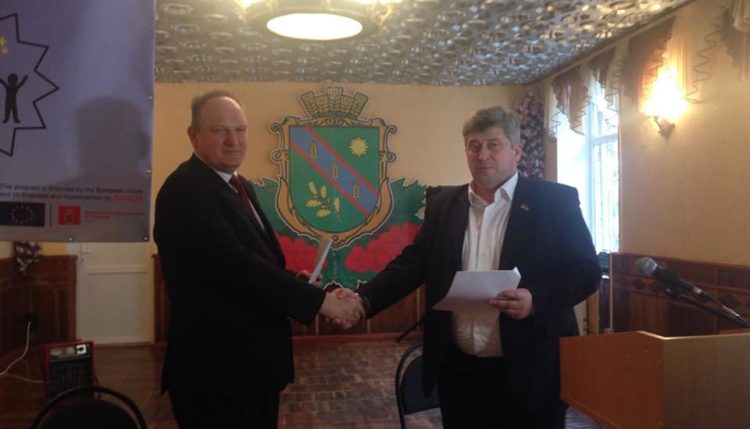 Being on the front line against corruption.

The Yakushyntsi united territorial community appeared to be the first in Ukraine to conclude the Memorandum on cooperation and orgnization of interactions with NGO “International Anti-corruption Assembly” within the confines of the project “Regional Anti-corruption Network”. Generally, more than 100 communities intended to take part in this project. The contest was the way to select the best 7 from 7 regions of the state, including Yakushynetska, that is not surprisingly after all. We should recall that here was the place to open the first Center for provision of administrative services, created Architectural and Construction Control Center, Municipal Police.

Though being first was a common thing for Yakushyntsi community, but the head of community said that the proposal to conclude the Memorandum on the Prevention of Corruption was astonishing. Vasyl Romaniuk wondered: “Why us? As the most corrupted?” And the answer was: “No, the most transparent.” Also Vasyl Stanislavovych emphasized the importance of fighting corruption, that is the key of building a modern European state with decent living conditions for people.

The Chairman of foundation Vyacheslav Sayenko informed about NGO “International Anti-corruption Assembly”, its goals and aims. “The main idea is to give acivists a tool to prevent corruption, to develop systematic recommendations and to bring information to “masses”. We help citizens of Ukraine to use their constisutional law to control the government, to monitor reports of this government and create transparent development plans with government, to join public projects and, in fact, to be absolute intiators of development”, – he underlined.

Actually, the project “Regional Anti-corruption Network was described by the manager Olexandra Yakovlieva. She noticed that the project is being implemented with support of EU anticorruption Intiative in Ukraine along with the Government of Denmark. It is the biggest project of a kind like that has ever been implemented by the European Union not only in our country, but in general. The aim is to help society to hold the events about fighting corruption.

“Within the framework of the Project we plan to gather the representatives of community, Local Governement agencies, regional mass media, business, and to get a common answer to what is corruption and how it influences today’s life on a local level, and how a zero-level corruption may promote community development.

During a five-month voluntary and free training composed of four information blocks, which is going to be conducted by experienced moderators, its participants will master tools for working with open data, get skills in filtering information and consider practical cases of fighting corruption in their own communities. A subject of classes will be selected according to the requests of people, and they will determine time and place of conducting. Trainings are going to start in April and continue till autumn. Summing up of implementation of the Project is helding in November, during the final meeting in Kyiv. Students who successfully pass exams will receive appropriate certificates that makes them more competetive on the labour-market. Communities with a zero-level tolerance to corruption will have a primary right to participate in grant programs and receive financial support from international donors.

The event was held with an active participation of the Head of Vinnytsa Regional Council Sergii Sitarskyi, especially in the area of actual issues.

The purpose of signing the document is consolidation of the society for building a corruption-free Ukraine as a complex of territorial communities. The objectives are: assistance in organization of independent and and effective vital activities of territorial communities; training of their active inhabitants; assistance in educating youth and raising the level of youth law awareness and responsibility; creating conductions  for development of effective mechanisms for ensuring the protection of human and citizen’s rights in order to reduce social tension in society and to increase investment climate.

According to the newspaper