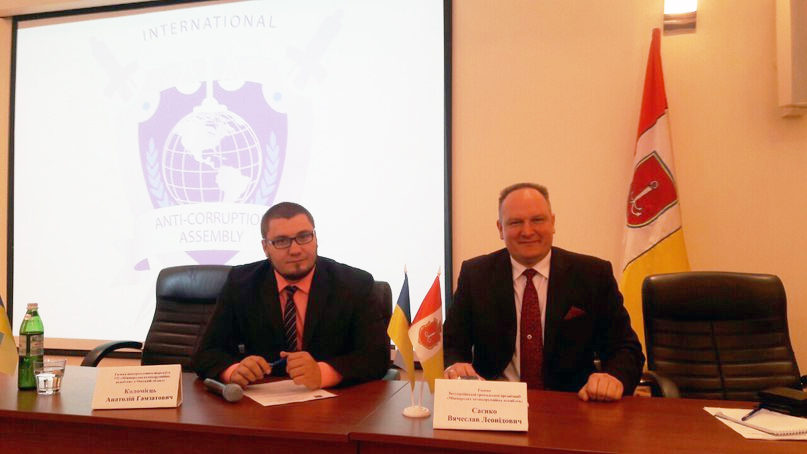 Today, 14 April, one million-city joined a non-corruption movement that swept biggest cities of Ukraine. Odessa became the fifth city in Ukraine and the first on the south coast which has taken under his wing NGO “Anticorruption International Assembly.”
At the opening were invited representatives of the authorities of the city and the region, non-governmental organizations, media representatives, as well as law enforcement agencies.
The first floor was given to the Head of the NGO “International Anti-Corruption Assembly” Saenko Vyacheslav, who noted the importance of the event, Odessa was the main city which began with active anti-corruption reforms, the introduction of transparent offices and the real fight against smuggling. “Today’s signing of a memorandum for us is a huge ball in front of”, – said Vyacheslav Saenko, – “as representatives of our team realized taking this important step to take the path of a fighter against corruption and understand the importance of our goal – to make Ukraine better, for the sake of our children.” Also announced in the near future plans, registration and opening a representative office in Portugal (Lisbon) and Italy. And also announced the date of the 2nd International Forum in Lisbon. By the end of the year the NGO “International Assembly of Anti-Corruption” will open representative offices in 25 countries around the world.

Headed by NGO in the Odessa region – Anatoly Kolomiets, and his deputies began Igor Kravchenko, Dmitry Mikhailov and Sergey Schmal. Which is not the first year take an active civic position and took on the responsibility side-by-side to fight corruption and to implement positive European experience in no less European “southern capital”.

The same word was given to the guests, representatives from other regions, Sergei Pushkin and Svetlana Fedkevich who shared positive experience of struggle in their fields, and noted – “the goal that sets itself Assembly in the first place is real, but the path to that goal is too thorny, on the southern colleagues can only wish inspiration and strength not to give up in front of obstacles, “- said Svetlana.

Sergey Glebovich focused on the problems of youth, in turn, and the next generation the importance of learning, who thinks very differently, not as standard, to live according to the law, and it begins with the family in the first place!

Meeting ended with the signing of a memorandum on cooperation and exchange solemn handshakes.